“We need new words, fresh words, words that can cut through pain and express how much it hurts to watch them suffer,” (Armstrong 173).

Life has never been easy in Rockton, but things have gotten even more difficult with someone anonymously revealing the secrets of it’s residents to the whole town. Understandably, it’s putting people on edge and Casey is eager to find out who may be doing this. But when one troublesome resident is found barely alive, Casey and Dalton are on the case to stop whoever is revealing those secrets and keeping the town safe. But with threat of closure looming, is it even possible to keep Rockton safe anymore?

A Stranger in Town ended on such an unexpected note that I was eager to find out how the Rockton series would end. I’ve been a long time fan of Kelley Armstrong and the Rockton series has been one of my favourites of hers so knowing that the series was coming to the end was heartbreaking, but Armstrong gives an action-packed finale with enough twists to make you dizzy.

And maybe that was the problem. The same characters we know and love are there, I still love Casey and Dalton’s relationship and I’m so happy that many of my favourites made it to the end of the series. While I enjoyed The Deepest of Secrets it did seem a bit scattered at times, too many plot points with new characters definitely made it hard to keep track of who was doing what and made it difficult to balance two very different plotlines. On the one hand we have someone revealing the secrets of the residents of Rockton, on the other we have the fact that Rockton is closing and what Casey and Dalton are going to do about that. I wish the two had been more connected because it got to the point that I’d be invested in Casey’s investigation only to focus on Rockton’s closure, and then I’d be so focused on that storyline that I’d be pulled into the investigation. I wish that Rockton closing had been the main storyline, and that maybe another mystery could have better paired up with that. I understand that this whole series is a mystery/thriller series, but with Rockton closing I couldn’t help but wonder what the point was to even investigate the I understand that Casey and Dalton are officers and that it makes sense for their characters to want to continue with the investigation and their belief in justice, but it just seemed a waste to investigate something when the residents were going to be leaving anyways. But maybe I’m just being callous.

The Deepest of Secrets is an engaging, at times muddled, conclusion to a wonderful series. The Rockton series has been such an interesting, investing, and exciting one to follow and I’m sad it’s over but excited to see what Armstrong will create next. 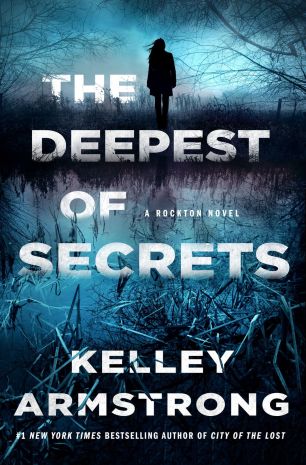 It’s not always easy to live in the hidden town of Rockton, something Detective Casey Duncan knows firsthand. Tucked away in the Yukon wilderness, the community survives—and thrives—because the residents’ many secrets stay just that—secret.
But what happens when these secrets start to come out? Overnight, no one is safe. It’s not a question of if your secret will come out—but when.
Casey and her boyfriend, Sheriff Eric Dalton, need to find the culprit while protecting those who have been thrust into the spotlight. For a place built on privacy and new beginnings, Rockton isn’t handling these revelations very well. People are turning on one another, and when one of the loudest complainers turns up barely alive, it’s clear that their trickster is actually a murderer.
The threat of exposure is reaching its breaking point, and no one knows what’s going to happen next.