I received this book from Playwrights Canada Press in exchange for an honest review.

Maria and her two children, pregnant teenager Lisa and excitable preteen Jude, have just moved in to a beautiful new house. Her children can’t believe it, it’s too good to be true, but Maria is insistent that this is there house. But the family is running away from something but Maria doesn’t want to talk about it, so while the family settles in Maria makes one last supper for her children and prepares them for how they will survive in the world without her.

Too Good to be True puts the dark in dark comedy. Cardinal does an excellent job using beats in his play as a way for audiences to wait for the characters to finally admit to the secrets they are hiding but, ultimately, fill with either another silence or a joke. There’s a heaviness to this play, a dread as audiences read/watch this family, seeing their relationship and the love they have for one another as they sadly wait for it to be torn apart. But Cardinal has created some killer dialogue here, that even with the heaviness allows for some breathe, some humour and wit that gives a wholesomeness to this family.

I also loved the characters. Despite the beats and how short the play is, you really get to know these characters. We see Maria who cares so fiercely and deeply for her family, who is willing to do anything to protect them and keep them safe. Lisa, a soon-to-be teen mother who knows her own mother is lying to her and Jude, excitable and only just becoming aware of the lies being told around them. This is a family that loves each other, who may not be the best at communicating but will go to the ends of the earth for one another.

A short but powerful play about lying, the truth, and the consquences of each, Too Good to be True is one that shouldn’t be missed! 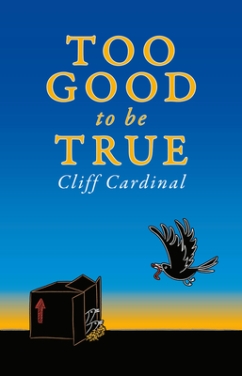 Maria and her kids–Lisa, a pregnant teenager, and Jude, an excitable preteen–are on the run following the murder of Lisa’s rapist. As the police close in, Maria is determined to give her kids a last supper that prepares them for everything they’re going to need to survive in the world without her.