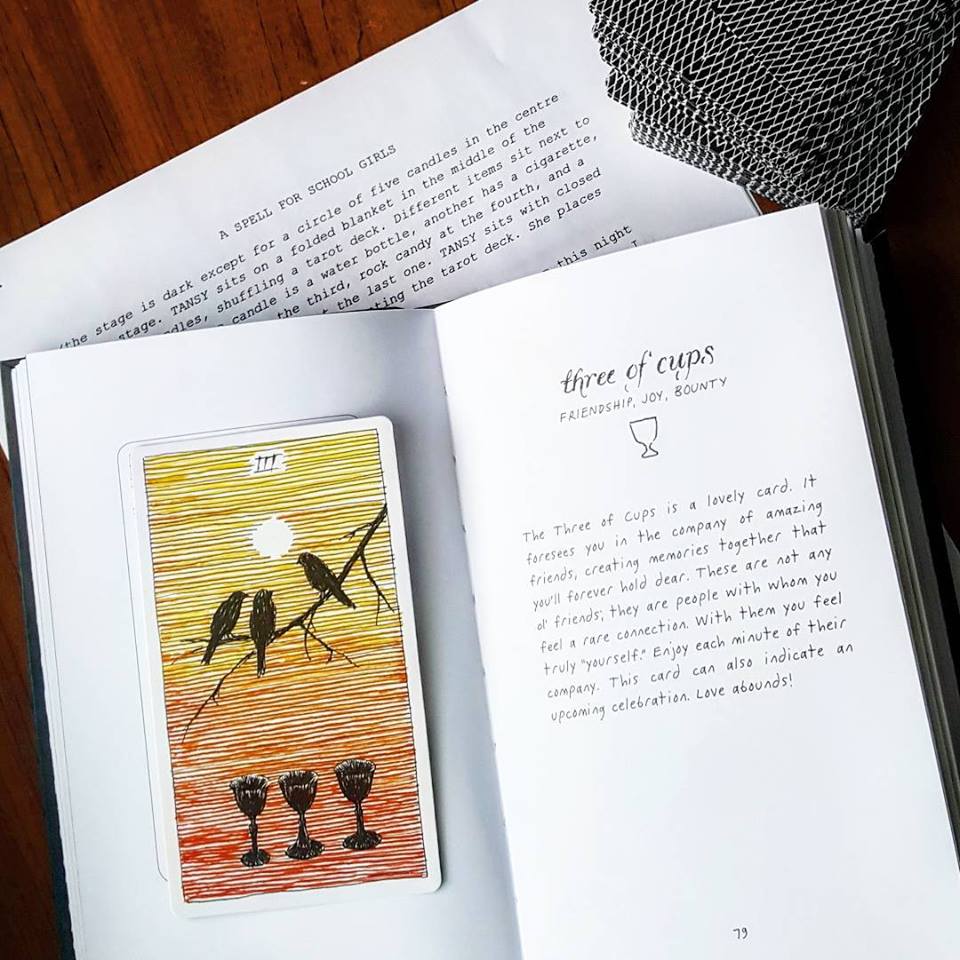 Whenever I start thinking of a story, it usually begins with a witch. Sometimes she’s a young girl learning about her powers, other times she’s a coven leader trying to understand the signs that have been plaguing her, recently it’s been a girl who’s had witchiness thrust upon her as she’s trying to figure out this new title in her life out (more on that in a later post. Maybe…). Whoever these made up ladies are, the common thread between them are that they are witches, and I have never completed any of their stories.

I don’t remember when I first became interested in witches. Maybe it was my young adoration for Bewitched, or maybe it was because I loved watching Sabrina, there may not even be a reason for it. My love of witches and witchcraft just seems to be an interest that has been apart of my being as long as writing and unicorns have been (and if you know me, you know that’s been a very long time). I do know that I reached my peak love of witches when I was a teenager.

My teenage years consisted of reading as many books as I could about magic and supernatural creatures which usually consisted on a lot of literature about vampires (I Was a Teenage Twihard, okay?) but occasionally drifted into the territory of witches. Witches and witchcraft weren’t as popular among the supernatural  genre of books back then, and though I don’t actually know why I can guess that it was because they were marketed to heterosexual teenage girls and focused on a female protagonist who was usually lusted after by two “super hot macho supernatural guys.” Sometimes they were both supernatural creatures, sometimes only one was, but if the guys were some supernatural creature, they were usually some variety of demon/werewolf/vampire/fairy/etc. and not usually a witch/wizard/sorcerer. The girl protagonists were almost always ordinary human’s with no special ability, though this later changed to the girl protagonist appearing human but actually being a super special magical saviour, which actually brings me to my next point and one of my favourite book series as a teenager.

I found this book series by accident. Maybe it was the pentagram on the cover that drew me in, maybe it was the title Book of Shadows, but I had finally found a book series about witches that seemed meant for me. The series is called Sweep by Cate Tiernan and follows teenager Morgan Rowlands who discovers she is apart of a long line of powerful witches. The series then goes on to chronicle Morgan learning how to use her powers, fighting off evil witches, and choosing which guy she’s going to end up with forever (hey, it’s a YA novel, you can’t ask for too much). Sweep looked at witches and witchcraft in an entirely different way than most YA books at the time were (and weren’t) talking about. The series focused on the actual Wiccan spirituality while adding some fantastical elements in between, and it made my love for witches and witchcraft grow even more making me search for more media that involved witchcraft for me to enjoy.

But as I’m learning, a fascination of witches and witchcraft wasn’t just something that I had but something a number of women seem attracted to. Anne Theriault wrote a fantastic article on why she thinks women love witches and witchcraft, and found that it might have something to do with power. She looks back to one of the most infamous historical cases of witchcraft, the Salem Witch Trials, and why the young girls Betty Parris and Abigail Williams (who ended up inadvertently starting the witch trials) started playing with magic and witchcraft. Theriault explains that most of Parris and Williams “spells” “centered around divining who their future husbands would be, because for a 17th century girl, the greatest indicator of how your life would play out was who you married and what social status you achieved through that marriage” (Theriault, The Establishment.co). This kind of “magic” is still common among young girls and women, from Parris and Williams own practice of ovomancy (egg magic), to find the initial of the men they would one day marry, to teenaged girls at sleepovers whispering Bloody Mary into a dark mirror, to pregnant women who will still sometimes use the “necklace trick” to predict the gender of their baby. These things may not be classified as witchcraft or spells per say, but they all involve women, who together hold at least a small belief that something supernatural will occur or that they have the power to predict something.

I think about why I, and other girls and women, are attracted to witchcraft, especially in the past few years where I’ve noticed more artwork and feminist sayings attached to it. Theriault explains that this more modern view of witchcraft can range from fashion and aesthetic choices of dark clothing and lipstick to naturopathy, crystals, to amber trapped bugs. While the term “witch” encompasses much more than just pointed hats, black cats, and broomsticks, Theriault argues that the main message is still present: “to be a witch is to be a woman with power in a world where women are often otherwise powerless” (Theriault, TheEstablishment.co).

Theriault goes on to talk about how gendered the word witch is to women when there is nothing that explicitly genders it (and the fact that historically men have also been accused of witchcraft), which made me think about how we gender power towards men and women at an early age. Particularly, I think about the similarities between superheroes and witches and how despite there similarities they seem forcibly separated.

The idea of superheroes and witches are both incredibly gendered, superheroes being typically marketed for boys and witches to women, though they each hold many similarities. Both superheroes and witches have powers, which are sometimes identical to one another (telepathy, telekinesis, pyrokinesis, etc.) and the modern idea of a witch usually involves saving or protecting the world from evil like superheroes typically do. But despite their similarities, their is still a gendered bias between them. Considering that both figures involve power and end up making those interested in the figures feeling powerful, I find their separation from one another incredibly strange.

Near the end of high school, I stopped my fascination with witches and the supernatural. It sounds so stupid to say it now, but it was all because of a bible verse. I went to a Catholic school, and I used to have a lot more faith than I do now. I remember that I was in religion class, we were reading something from the bible for an assignment, and my eyes drifted to a passage about witchcraft. I can’t remember which passage it was (probably one of these fun verses) but it said something along the lines of “[t]hou shalt not practice/believe in witchcraft or go to hell,” and that was that for me. I didn’t want to go to hell, so it was the best option to just stop all this fascination with witchcraft and just focus on reality. These verses didn’t make me become any more involved with the church, didn’t make me a better Catholic, and didn’t make me any more dedicated to my faith, but they did scare me enough to stop reading and learning about something I really cared about.

In some way, I think it was better that I stopped caring so much about witches and witchcraft then. As a teenager, I think I had a very romantic view of the whole thing and I never really did understand the full spirituality or belief system about it. But their was a part of me that was interested, and that part got too scared to learn more, and I wonder what would have happened if all of that never happened.

As I’ve gotten older, I’ve started to become more in tune with my own identity as a feminist, and with all the symbolism of witches becoming connected between the two, I’ve slowly started doing more research. I’m not particularly interested in converting into any religion or spirituality, but I like learning about them, I like doing research, and I like that their are articles out their like Theriault’s that seem like they’re meant for me, that explain a part of myself I never understood before.

Going back to all those fictional witches in my head, and why their stories aren’t completed, I think it goes back to Theriault’s idea of power, and my own rediscovery of witches. I’m slowly starting to find ways to bring my past fascinations into my present, and I think these characters are doing something similar. I’m trying to figure out how this new idea of witches and witchcraft fits with them, and I’m thinking about the power they are looking for and how I can help them find it. It might take some time to figure all this out, but maybe a little magic will come my way to lead me to their stories.

(Title of blog post is taken from the quote from “The Witches of BlackBrook” by Tish Thawer “We are the granddaughters of the witches you weren’t able to burn.”)

2 thoughts on “The Witches You Couldn’t Burn”

Am I do this #BookFace right???
When you happen to dress up like one of the books in one of your favourite series.🐝🐝🐝
TODAY'S THE DAY!!! YOU CAN NOW LISTEN TO MY SHORT PLAY "DEAD SERIOUS" ON SPOTIFY!!!
I finally read #WhereTheCrawdadsSing by #DeliaOwens!!! A well-written, book club book. Not sure what I mean??? Read my full #BookReview on my blog, link in bio!!!
Rainbows from my suncatcher on books I've read, is there anything better???
#MidnightMass is one of my favourite shows and this book is fantastic!!!