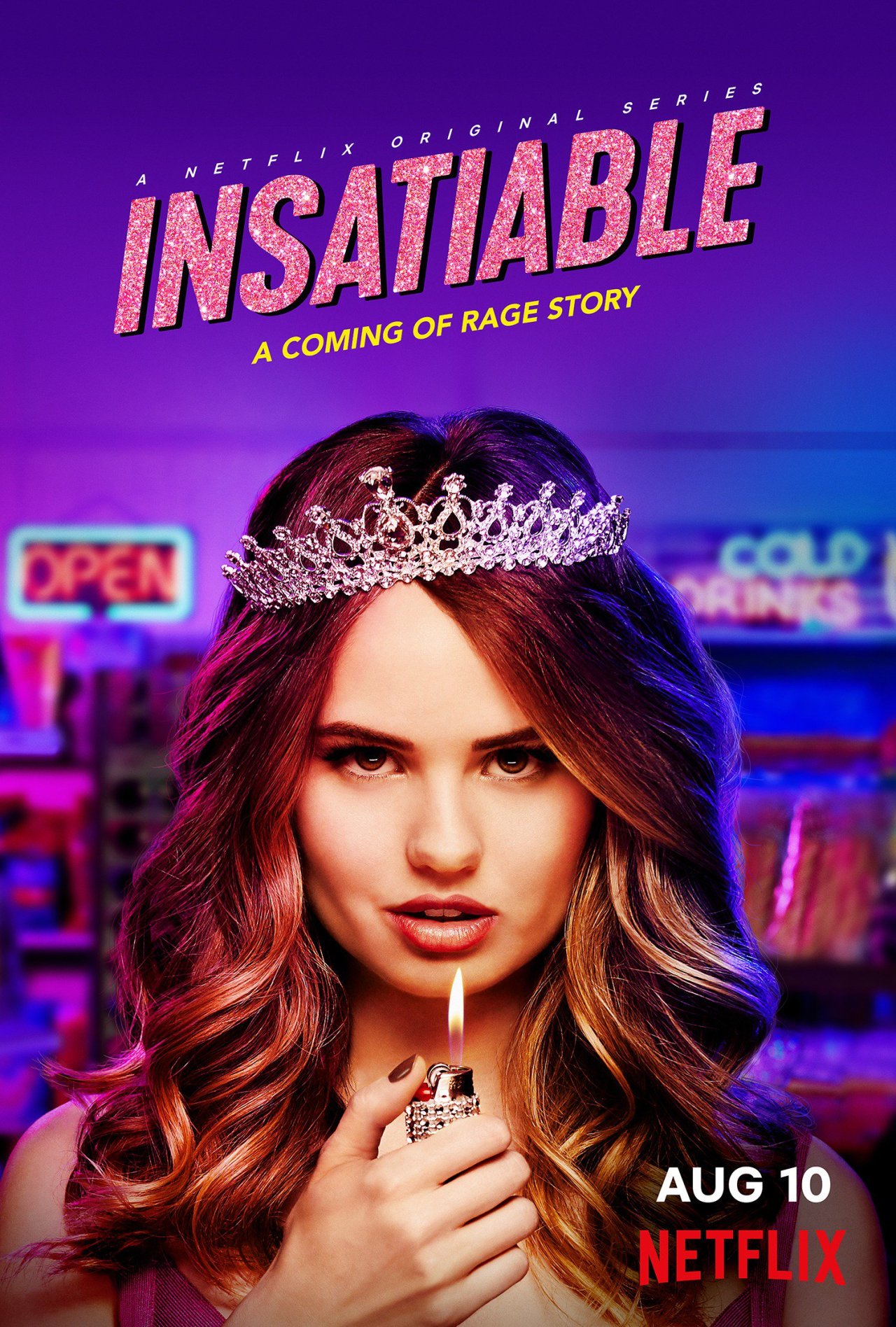 A few weeks ago I started watching Insatiable with much trepidation after a friend’s recommendation. After all, I’d heard about the criticisms, how it was offensive to “fat”, LGTBQ*, skinny, and just people as a whole. I hadn’t watched it yet, but because of the huge negative backlash online I didn’t even think about watching it until my friend did and told me that she loved it. I trust this friend a lot so if she was telling me that this show was good and that I would enjoy it, I knew I had to give it a try despite the critic’s warnings.

And you know what? She was right, I loved Insatiable! It isn’t the best show on Netflix, but it’s funny and strange and pretty unique for what’s currently on there. It isn’t your typical high school drama, but boy is there a lot of it! So why then do people hate it?

Well, it’s pretty clear even from my own watching of the show that the people complaining about Insatiable either haven’t watched the show, have only watched the trailer, or are being overly nit-picky with its themes. And granted the trailer for the show makes it look like a typical high school drama: an unpopular fat girl loses weight and becomes skinny and popular and wants to destroy all the people who were mean to her. It sounds predictable and problematic in some aspects, but to actually watch the show is to learn about the layers to it and how clever and funny it actually is. But the first thing you have to understand before you watch Insatiable is that it’s a dark comedy and a satire.

I don’t want to give any spoilers about the show because I really think more people should watch it (and I’m so happy a second season is happening!), but Insatiable is much more than an unpopular fat girl becoming skinny and vengeful, though that is part of it. It’s about how the main character who goes through this transformation still struggles with body image issues, how even though she’s skinny she still feels like she has to lose weight and recognizes her past issues with food as an eating disorder. The show is also incredibly diverse with its cast of characters in both race and sexual orientation, including a few story lines that explore characters sexual orientation about what labels people put onto them and the labels they put onto themselves. And with all those progressive story lines, it still manages to have a few dark story lines and serious moments, as well as laugh out loud  one liners and ridiculous story lines to make into one unique show. It makes fun of the typical high school dramas that we expect and completely throws away the ugly girl becoming popular trope by having the main character realize her life isn’t better because she’s skinny, and how your problems don’t get fixed after a makeover.

And if people watched it they’d know that! Because I almost made the same mistake as so many other people who didn’t see the show. I was complaining about it before I watched it, telling people that it was a problematic and stupid looking show. Thankfully my friend convinced me to watch it and my opinion of the show was changed, but how do you convince strangers on the internet to watch something that everyone is screaming about is bad?

I don’t have an answer for that, but I have seen more and more people complaining about movies and shows based on the trailer alone. It happened with Ghost in the Shell with the casting of Scarlett Johansson as an Asian character (which if you actually watch/read about happened in the movie, you’ll understand why this casting choice was made and why it works to be powerful) and a few months ago it happened with the announcement of a remake of the cult classic film Heathers as a tv show who’s release date was pushed back to this October.

The problem people currently have with the new Heathers are the changes with the Heathers themselves. The trailer shows the three Heathers as a plus sized girl, a black girl, and a queer person who their new friend Veronica Sawyer (who is white) and her boyfriend J.D. (also white) start plotting to kill in faked suicide attempts. The issue of course was that by making the Heathers more diverse characters and having them killed off was using more tropes of killed minority figures and was, overall, a bad thing to do.

Now obviously I haven’t seen the show yet, but I can’t help but wonder if maybe that’s the point? By having a white teenage couple kill the popular students at their school (regardless of their diversity) making a bigger point? Couldn’t the show be making a point about privilege, about how being privileged can help you get away with doing horrible things? Of course, I can’t predict if this is the direction the show is going, though the show was set to air in February/March of this year but was pushed back because of the Parkland School Shooting. And what show would push back their release date for a tragedy like that unless it was somehow relevant to it?

The one thing Insatiable and Heathers have in common is that they are both dark comedies, which leads its way into satire. The movie of Heathers was celebrated because it was a dark comedy, taking the teen high school movie dynamic and putting it on its head, parodying how death gets sensationalized. Insatiable is doing a nearly identical thing (though more about image and bullying than death, though it’s still their) and I have no doubt that the new adaption of Heathers will do a similar thing by making the show relevant to issues currently happening (cough cough privilege, gun violence, etc. cough cough).

I hate to sound like an old person by saying that “kids these days don’t know how to take a joke,” but maybe there’s a little bit of that here. Dark comedies ask you to laugh at something inappropriate; they take a look at very serious issues and usually over dramatize them to make them funny, to make you wonder why you’re laughing at something that’s bad. There is definitely a line between a dark comedy and something offensive, and I think dark comedies can be incredibly hard to create because the balance between both is very difficult to maintain, but it can be done.

And I understand why people don’t want to laugh at dark comedies or don’t want to watch them, but I definitely think we need to be a bit less critical before we make a decision if something is good or not. Like the old saying of how you “can’t judge a book by its cover,” you can’t judge a t.v. show/movie on its trailer. So watch the show (or at least a few episodes) and then make your decision, because if you’re going to complain you should at least know what you’re complaining about.

(The Insatiable trailer and Heathers trailer.)

SHRIMP. HEAVEN. NOW*!!!!!!!! 🦐🦐🦐
I read many books recently and they were...okay. Read the reviews on my blog!
Couldn't take a nice picture (because it's hard to take a picture of an ebook) but my review for #AStrangerInTown by #KelleyArmstrong (which came out today!!!) is up on the blog, check it out!
Exciting things happening over on the blog, I got to host Kelley Armstrong for a blog tour for her newest book in the Rockton series A STRANGER IN TOWN (which comes out THIS COMING TUESDAY!). Check out my interview to find out why Kelley Armstrong chose to set the series in the Yukon, if she's ever done the Sourtoe Cocktail and more!
Another #bookreview?!?! Looks like it! #MyDarkVanessa is an unforgettable and at times disturbing book about a woman looking back at the relationship she had with her English teacher when she was fifteen as she starts to understand what happened to her.
I did a Year Ahead tarot spread to start 2021 and then put a little note on the card I picked and the meaning to help reflect on each month.