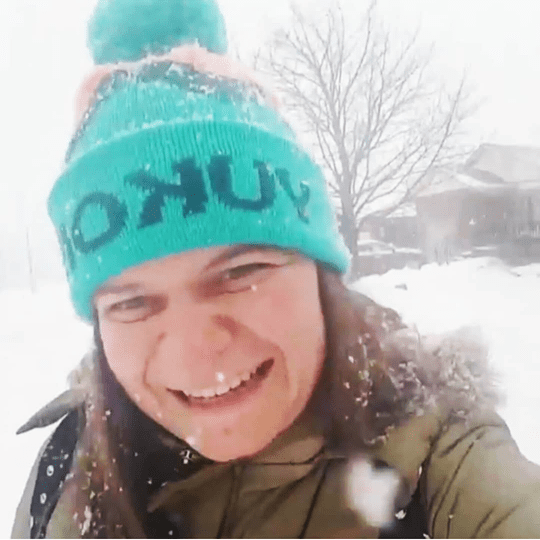 I come from a family of walkers. My dad used to be a runner and ran a few marathons before his heart condition, and my mom just liked walking. They taught my sister and I to enjoy it from a young age too, I remember being very young and going to Niagara Falls for a few days during the March Break and walking from our hotel to Clifton Hill and back again nearly every day of our trip, and according to google maps that’s a nearly half hour walk. In December, my sister and I surprised our dad with a day trip to the ROM and we all took the GO Bus down to Toronto and then walked from Union Station to the museum which was a forty minute walk. When I told people that we had walked they were shocked by it, reminding us that there was a subway stop right there that we could have taken instead, but why pay when the walk isn’t really that far?

So on Saturday when we got walloped with thirty centimetres (though I’m pretty sure it ended up being more than that) of snow, I decided to go for a walk to run errands. Usually I save certain tasks for when I have time to walk to do them: going to the bank, buying cat food, getting this and that from the drug store. I can drive, I have a car, but I like forcing myself outside and doing something. I work a full-time job inside, a part-time job also inside, and just need a chance to breathe some fresh air sometimes.

It’s easier in the Spring and Summer, when the clocks jump forward, when it’s brighter out. I’m not under such a strict time limit, since the sun starts setting by the time I get home from work. I’m not comfortable walking alone in the dark.

So even though my city was in the middle of a snow storm, I decided to go for a walk. I had a cheque to cash, a rehearsal space to pay for, a disposable camera to drop off, and cat food to buy. The walk usually takes an hour, but I underestimated the travel time in the snow. It stung my eyes, my face, though it wasn’t as cold as I thought it would be, it was just a lot of snow.

And the snow wasn’t even that heavy. I had shoveled earlier that morning (to no effect since an hour later it looked like I hadn’t done anything) and it was soft, fluffy, something that could just be pushed away and thrown over my shoulder without much effort. But it was deep though, while I walked it easily covered my shins, though I was happy that I had my new long winter boots on.

I had to walk towards the snow on my way to the bank and had to look at the ground most of the time, just my feet in front of me and more than a few times I stumbled into the street without meaning too, almost slipped even more. When I got to the rec centre to pay for my rehearsal space they were surprised to see me or anyone, wondering why someone would be walking to the rec centre in the snow.

Most of the businesses I went to were empty that day, and who could blame them. Driving looked treacherous with the roads not plowed or salted yet, I was struggling enough walking. It was a day to stay inside, warm and cozy and safe.

And I’d done the opposite.

My normal hour walk took me two hours, and it wasn’t until I got home that I realized how cold I actually was.  I ended up getting a chill and huddled in my bed for longer than I should have to try to get rid of the cold.

Still, I wouldn’t have changed anything (okay, maybe I wouldn’t have walked for as long as I did). I don’t get a chance to walk a lot now with how much I work, though really I could probably schedule my time better. Still, there’s something about walking in the snow. I like how the coldness feels, how it is a little harder to walk through the snow and ice, and just enjoying how everything looks in the snow.

I hope I can do it again soon.

(Blurry picture taken from a screenshot from my Instagram story during my walk in the snow.)

OLA Superconference was so much fun and I hope I get the chance to go back next year.
When your glasses match your current read... 👓👓👓
Once upon a time I tried to make a podcast about dead girls in media and our obsession with them. Now I have a Substack.
Sometimes, you just can't trust the Goodreads Reader's Choice Award for Horror. Sometimes, you can't trust #BookTok.
Got a cool little light for Christmas and now I only take 💫artsy💫 selfies
New #BookReview!!!
Join 56 other subscribers