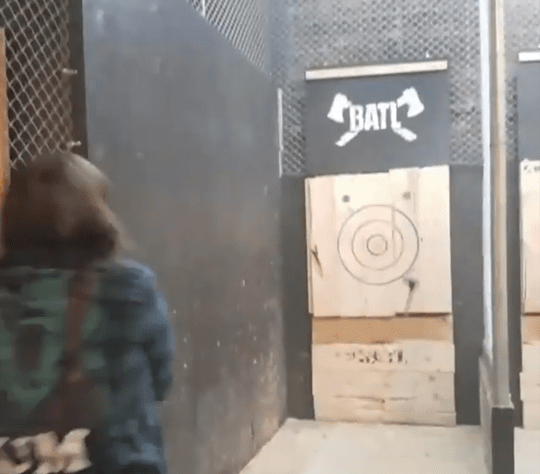 My friend came to visit from London (the non-interesting Canadian one, though this person interesting) and suggested we go axe throwing. I’d only vaguely heard of axe throwing as a thing that could be done and was done by some former classmates and strangers on Instagram, but I didn’t know where it could be done. I definitely didn’t know there was an axe throwing place in my hometown (and a league if it turns out axe throwing is your passion) but there is so we decided to do it, because what’s better to do on a rainy Saturday than throw some axes?

Watching someone throw an axe into a large wooden board looks much easier than it actually is, or at least it did to me. The axes weren’t full on tree cutting axes, they were actually quite small and according to the blade weighed only one and a half-pounds, but they had a blade and the whole point of the day was to throw them and get them stuck into a wooden board so obviously they were sharp. There’s a whole technique to throwing them: placing your hands one on top of the other, swinging with your body and just opening your hands to let it fly. Throwing it hard wasn’t necessary, it’s an axe and with enough force it will reach it’s mark even if it doesn’t actually stick into the board it will at least hit it, and that counts for something right?

My sister was very good at it and was almost a natural, hitting close to a bulls-eye on her first try. My other friend was just as good, hitting the corners

We threw axes for an hour and I got it into the board maybe four times? For a long time and with much coaching from the instructor I finally managed to stick two in a row using two hands when finally another instructor (who happened to be an old friend) taught me how to throw one handed.

I wasn’t good at that either, though I did manage to hit it in once one handed (wait does that mean I only made it into the board three times?).

But honestly, I didn’t care. I just liked that I was with my friends doing something so weird and something I’d never done before. I would have never done axe throwing on my own because I never would have thought of doing it! I think sometimes we put a lot of pressure on ourselves to be immediately good at things the first time we try them, and though we get lucky sometimes a lot of the time we struggle with it. Like me an ultimate frisbee, I’ve played for a year and I’m still not very good but I’m learning how to be a better player and in that year I’ve managed to score some points and get better at throwing and catching. And even if I play a few games in a row without getting a point, I’m having fun doing it and that’s really all that matters.

So no, I’m not great at axe throwing but that doesn’t mean I couldn’t be, though I’m not sure if axe throwing is the hobby I want to pick up (my arms STILL hurt!) but it’s definitely something I’d do again. Because it was fun, and maybe I’ll get better or maybe I’ll just suck, but as long as I’m having a good time is the most important thing.

(Screenshot of me throwing an axe poorly at Batl Grounds taken by my friend Pizza Dog Cosplay.)

A true beaut 🐱🐱🐱
The CATS Yowling Edition was literally everything I could want and more. My only complaint is that it should have been called the Jellicle Ball edition instead!!!🐱🐱🐱
#redecorating
I recently finished #SuchaFunAge by #KileyReid and IT WAS SO GOOD! Very smart, funny, and great in showing the dangers of the White Saviour. Read the full #bookreview on my blog, LINK IN BIO!
I already mentioned this in my story earlier this week but I'm going to share it again because now the FULL VERSION OF MY STORY "WHAT HAPPENED TO NATALIE?" IS UP TO READ AND IT HAS AN F-BOMB AND EVERYTHING SO WHY NOT READ IT? Thank you to @gritlitfestival and Casey Plett for choosing my story as an honourable mention, it's still such a crazy thing I am so grateful for. LINK TO STORY IN BIO!
I made a shirt!!!! Thanks to @needlework_hamilton for the class and super cute fabric, will definitely be making more of these!!! #needlework #sewing #grainlinestudio #lindensweatshirt #birdsandtea #stilllookawkwardbutohwell