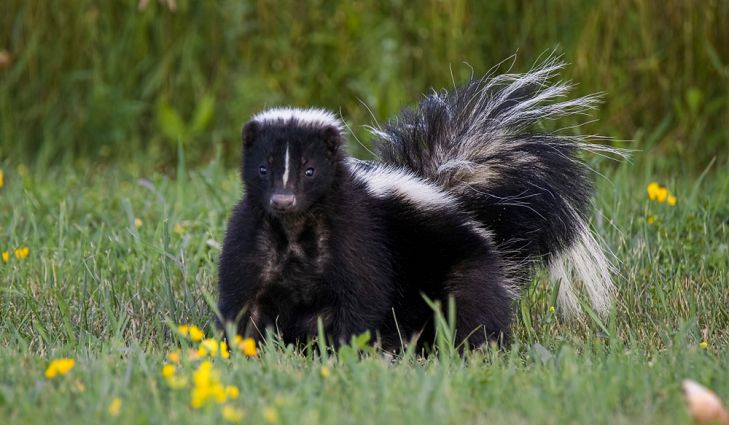 This is pretty self explanatory but yesterday when I was driving home from work I saw a skunk get run over by a car so I wrote about it.

I saw the skunk a car in front of me. It wasn’t moving too fast, just lumbering slowly across the street and I slowed down, ready to stop and give it room to cross if needed. There was a car behind me but it wasn’t tailgating me, if I slowed it would probably follow. I don’t know if the car in front of me could see it, though it was visible to me. Not right away of course, it was dark and rainy. At first I thought the skunk was a piece of a garbage bag being blown across the road until I saw the stripe of white down it’s middle.

I remember that the car in front of me slowed, and I remember that it didn’t make a difference. The skunk was so close to making it across the road, so close to making it to wherever it had planned to go when the back wheel of the car hit it and flipped it on it’s back. There wasn’t any blood, not any I could see at the time anyways but in the brief moment I passed it I could see it wasn’t dead. It’s foot and body twitched in pain and I wondered if some of the bones were broken, of how much pain it must have been in.

I kept driving, partly because I was late getting home and because the way the street was formatted pulling over to the side wasn’t an option, and turning around would have caused it’s own problems. My first thought when I saw the skunk writhing was to somehow run over it again, not in a cruel way but to kill it, which granted still sounds cruel. What I mean is I didn’t want it to be in pain. I didn’t want it to be waiting to die on the cold street with the rain, I just wanted it to stop hurting.

A retired teacher told me a story about when he started teaching and how one of the primary grades hatched some chicks (something that used to be in the curriculum in the 90s apparently) when one of the chicks hatched with it’s stomach on the outside of it’s body. It was fine in every other way except that there was no way it could survive with it’s stomach on the outside of it, where dust and food kept sticking to the soft pink bits and the other chicks starting pecking at the stomach, unsure of what it was. The primary teachers asked the other teacher to kill the chick, since it wouldn’t have a long life anyways. So the teacher put the chick in a bag and put it against the exhaust pipe of their car while it ran until the chick stopped cheeping. They said it was surprising how long it took for it to die, and how difficult it was for them to tell the story so many years later.

It makes me think of vets and the great respect I have for them, having to put down animals everyday which I can only imagine how difficult that is. I had to have my first cat Tamsin put down after she developed a genetic disorder with no cure. Recognizing that I had to put her down so she wasn’t suffering and being with her when she died was one of the hardest things I’ve ever had to do, but I couldn’t have her suffer.

Later in the evening I was driving with my friends back home and we passed the place where the skunk had been hit. It was still on the road, curled up now on it’s side. I don’t know if another car had hit it, it still looked pretty intact when I saw it again but it was clearly dead by this point. I wondered if the car behind me had found a way to stop it’s suffering or if it had died on it’s own. I wished their was someway I could have helped it.