Well it’s November and that means a couple of things. First it means we’re back to our regularly scheduled blog posts, which means one personal post every Monday with a possible book review thrown in later to mix it up. While the hybrid Inktober thing was a pretty fun exercise I’m not sure if I’d do it again, it was just too much pressure sometimes to write during certain days, and to do it every day when that’s the whole goal of NaNoWriMo it was definitely a lot. Which of course brings me to the second thing November brings, NaNoWriMo.

I’ve talked about NaNoWriMo before (okay, a few times), but to anyone new NaNoWriMo, or as it’s known in its long form National Novel Writing Month, is just as the title says a month dedicated to writing a 50,000 word novel. How is this done? Well, by maintaining a writing goal of 1667 words per day writers can theoretically write a 50,000 word novel assuming that the word count is followed. Writers can always write more or less, it’s up to them how long they’d like their novel to be. Some writers prefer to edit an existing work while others start the way NaNoWriMo began: by starting a novel from scratch on November 1st.

According to the NaNoWriMo website I joined in 2010 but didn’t actually start participating until the year after. I never finished my first story on their, and it’s long been deleted when our already crappy family desktop finally went caput. But I reached 23,516 words which was the first time I’d ever written so many words for a story before. I only reached just over 5000 words the year after and took a break until 2017 where I won with 51,025 words (a story that I’M STILL WORKING ON AHHH!!!), then followed it up last year with 51,311 words.

When you win NaNoWriMo you don’t really get anything. Okay, they email you a certificate with your name on it and you can print it out if you really want to, and you get some pretty sweet discounts on writing programs (50% off Scrivenor!), but other than that it’s up to you what winning is. I’ve won twice and neither of those works are actually finished, one keeps changing and one is a pile of scraps. But I reached 50,000 words, and that was an accomplishment for me and always feels like winning (also one year I bought Scrivenor with my discount so I’m not complaining). But once NaNoWriMo and your 50,000 words are up it’s up to you what to do next.

At the time of this blog post I’ve written 5154 words of my NaNo project, but it isn’t completely accurate because I haven’t updated it since last night. I’m hoping to make my word count today and possibly a bit over because I know tomorrow I have a long day or working and my playwriting unit at night which means not a lot of time for NaNo.

I’ve tried changing things up this year, by which I mean making everything a little more harder for myself. I usually stick to writing on my laptop because it automatically counts my words which makes updating word count so much easier. But I’ve found that when I hand write in a notebook the story sticks with me better and I can better focus on what I’m writing and where I want to go next. So I’ve decided to do both: hand write my story and then when I reach word count (or what I think is word count because I don’t want to count manually) I type it into Scrivenor and then put my updated count on the website. So far it’s been working and I’m curious to see how this will work out for the rest of the month and if this kind of writing method will be used for whatever projects I write in the future.

Another cool thing about NaNoWriMo is that they set up writing groups based on where you live. My region has had one for ages but I’ve always been too nervous to attend their events. I went to their NaNo Kick-Off yesterday though and had a great time and I’m kicking myself for not going to these Kick-Off’s and write-in’s sooner. I’m always looking for writing groups and it’s nice to find a group of good people in my city to do it with.

So that’s my annual NaNoWriMo post, let’s see how I feel at the end of the month and what train wreck may lay there in the end!

P.S. Do you want to be my Writing Buddy on NaNoWriMo? Neat, you can do that here.

P.S.S. Here’s a 2019 Word Count calendar I found for this year’s NaNoWriMo for anyone who needs it! 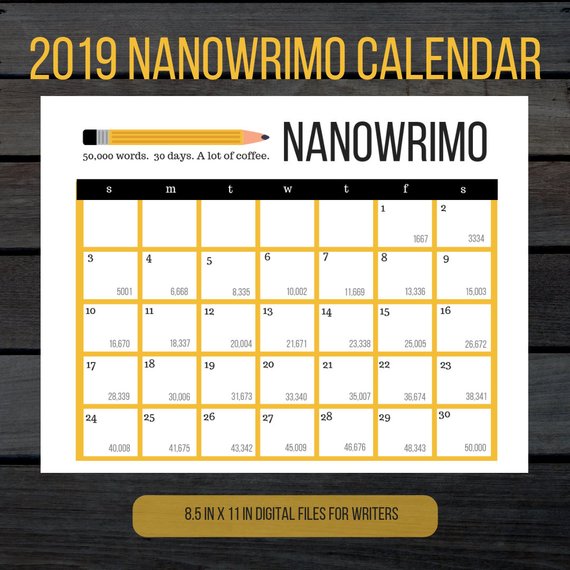 (No more fun pictures with my posts because my new blog format doesn’t look great with them. It was fun while it lasted though, right? I promise to throw some pictures in my future posts if I find them relevant!)