“The world was always conspiring to make young women vulnerable while labeling it as ‘fun.’ Made it seem like we were in control, like we were making all the choices, and then it was our fault when things went wrong. Us and our short skirts, our makeup, our taste for rum, for liking the things we were told to like, wanting what we were taught to want,” (Mullen 43).

Please See Us begins with two Jane Does lying dead in a marsh behind the Sunset Motel, their killer the only person who knows they’re there. Meanwhile sixteen-year-old Clara, a psychic, has trouble keeping rent with few clients coming to Atlantic City and has to think of new and dangerous ways to keep from being homeless. But one day she gets a client for a girl missing in Atlantic City, and Clara gets vision saying that the missing girl and others are at risk. But Clara’s gift isn’t as clear as she’d like it to be and when she meets Lily, a former New York gallery-girl, Clara thinks she may have found the one person who can help her solve the case of the missing girls. But Clara and Lily find themselves falling into similar patterns as the other missing girls; will they avoid the same fate?I still don’t know how I feel about this book. On the one hand the novel is a great commentary on the dangers of being a woman, particularly sex workers, as well as the disregard that comes when sex workers go missing or are assaulted. But I just found I had so much trouble getting into and connecting to the story.

“Who they were, their longings and dreams, their secrets and their darkest thoughts, will be lost. Time will turn them into warnings, symptoms, into stories people tell in dark corners of bars,” (Mullen 337).

Please See Us is an incredibly dark and upsetting book and Mullen does a great job making her readers feel that. It was hard for me to motivate myself to read this because of how upsetting it is at times. This is not a book where things get better, where a white knight comes in and makes everyone’s problems disappear. This is a book about struggle, about trauma, about violence against women and I commend Mullen for creating such a different mystery narrative, for giving a voice to the missing women and acknowledging them as more than dead bodies. It isn’t a particularly satisfying mystery, but not all real mysteries have concrete endings.

The book alternates from four main characters perspectives, the most interesting definitely being Clara and the Janes. Again, I enjoyed that Mullen acknowledged the dead women and gave them voices as people and not bodies; it’s probably the strongest part of the book. I enjoyed Clara’s perspective next though she didn’t always sound like a teenager, though based on her situation I suppose that makes sense. Reading about her visions was also a unique choice for a mystery and I liked how Mullen blended Clara’s visions with the mystery in a way that felt real. I disliked Lily’s perspective and most of her character. I understood her point for Clara’s sake but overall wanted to speed through her chapters. And I still don’t see the point of Luis. Okay, I do in connection to Lily’s story but he really wasn’t needed, cutting him out of the book wouldn’t have changed the story overall.

An incredibly quotable read, Please See Us is an unusual mystery that successfully blends psychic abilities and suspense. While it’s a heavy read, it’s a reminder that there is a lot of darkness in life we don’t want to acknowledge, and it’s something we have to be aware of. 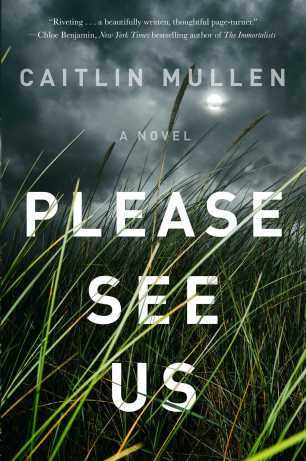 “Summer has come to Atlantic City but the boardwalk is empty of tourists, the casino lights have dimmed, and two Jane Does are laid out in the marshland behind the Sunset Motel, just west of town. Only one person even knows they’re there.

Meanwhile, Clara, a young boardwalk psychic, struggles to attract clients for the tarot readings that pay her rent. When she begins to experience very real and disturbing visions, she suspects they could be related to the recent cases of women gone missing in town. When Clara meets Lily, an ex-Soho art gallery girl who is working at a desolate casino spa and reeling from a personal tragedy, she thinks Lily may be able to help her. But Lily has her own demons to face. If they can put the pieces together in time, they may save another lost girl—so long as their efforts don’t attract perilous attention first. Can they break the ill-fated cycle, or will they join the other victims?”