“He didn’t see what she did, and she could never really tell him what was really wrong – that it had all been a mistake: She didn’t know how to be a mother; why had that ever seemed like a good idea?” (Stage 4).

Seven-year-old Hanna loves her Daddy. He understands her better than anyone and he is her most special person. She imagines a life where just her and Daddy get to live happily each day, but Mommy stands in the way, and Hanna thinks it’s time for her to leave. Suzette loves her mute daughter, despite Hanna acting out only for her to see, despite homeschooling her for years after she is expelled from every school she and her husband try to enroll her in. But Suzette has noticed a surprisingly violent tone to Hanna’s mischief, and already battling an autoimmune disease, she wonders how much longer she can handle her daughter.

Baby Teeth has been on a reading radar for a long time, it’s gotten great reviews and is still a much talked about book in the horror genre. It still pops up on BookTok and reading lists about books to read for October, and now I can finally say I’ve read it. And, well, I was a bit disappointed.

The book takes quite a long time to get into. It’s written in third person and alternates between Hanna and Suzette’s perspective, but the writing is odd. Aside from Suzette calling her husband Alex and Hanna calling him Daddy, the voices don’t sound all that different from one another. Hanna’s chapters especially were either written in a way that made her seem much older than seven at some points and younger at others. Suzette’s perspective was fine, and I did enjoy reading about a chronically ill character in such realistic detail. Rarely do chronically ill characters get representation as protagonists in fiction and it was nice to get to read one that was so true to the realities of those who are chronically ill.

The first half of the book though made reading a chore. It’s a back and forth between Hanna and Suzette, a war between them that just gets tedious. Hanna does something bad, Suzette tells her husband about it and he doesn’t believe her, over and over and I just kept waiting for something, anything to happen to push the story along. Finally it does and I will say that the second half of the novel is much more enjoyable than the first.

Probably my favourite thing about this book is how muddy it is. Looking at our main cast, there are no good characters. They all have flaws (some more obvious than others) but the revelations near the end of the book have really stuck with me. When reading a domestic-based book like this, certain topics or ideas aren’t brought up, even in a thriller/horror setting. I don’t mean to be vague, and it’s not a twist per se, but something to be digested by the reader.

While Baby Teeth was disappointing I’ll definitely be thinking about it’s ending for awhile. It might not be high on my list of books to recommend, but it definitely has something that keeps people talking about it. 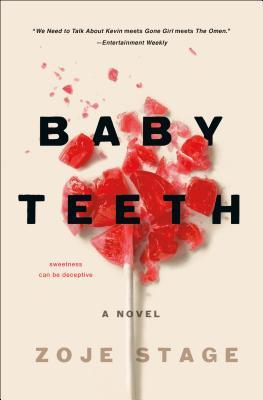 “Meet Hanna.
She’s the sweet-but-silent angel in the adoring eyes of her Daddy. He’s the only person who understands her, and all Hanna wants is to live happily ever after with him. But Mommy stands in her way, and she’ll try any trick she can think of to get rid of her. Ideally for good.
Meet Suzette.
She loves her daughter, really, but after years of expulsions and strained home schooling, her precarious health and sanity are weakening day by day. As Hanna’s tricks become increasingly sophisticated, and Suzette’s husband remains blind to the failing family dynamics, Suzette starts to fear that there’s something seriously wrong, and that maybe home isn’t the best place for their baby girl after all. ”