I received this book from The Next Best Book Club in exchange for an honest review.

I was first brought in to Beth Gilstrap’s Deadheading and Other Stories from it’s gorgeous cover, what kept me going was the heartachingly stories inside. As the back of the book tells, these stories are deeply entrenched in the South. The stories are hot with tension, slow with sadness, and ready to smack you into reality right as you’ve settled in. The characters are so incredibly real and it was so easy to love and care for them in such short passages. Gilstrap’s collection is short, to the point, and filled with unforgettable stories I know I’ll turn back too.

You can read my thoughts on each story below:

Reese is busy at the bank, collecting mud for her Pawpaw and Gammie. A great start to the anthology, I cared for these characters so deeply in such a few pages, though I was confused about the eating dirt part.

Imogene and her husband Paul have recently found themselves without jobs and decide to try and go back to their youth by taking a trip to the lake.

No Matter How Fine – 4 stars

Janine loves her store but if she’s being honest with herself it isn’t doing so well. I love how fully-fleshed out Janine, her father, and Maddie all were, I slipped right into this story so easily and was sad when it ended because I missed the characters.

Janine is back, a few years after the previous story, and it’s sale day at the store. I really liked returning to this character and thought it was smart to include this and “No Matter How Fine” back to back, I think a novel could be made out of Janine because she’s got a lot of story in her.

It’s nearly Christmas, 1999, and Vicky Lee and Phil are having a fight again. I like how Gilstrap gave enough information about these characters to have an idea of why they are how they are without giving it all away. It’s a lot of inferences and heartache which makes this story memorable.

Like Air, Or Bread, Or Hard Apple Candy – 2 stars

Beautifully written but it honestly lost me, this one just didn’t stick with me.

I love me a short story with some Catholic symbolism in it. Loved the imagery in this one.

The Gopher in Rae’s Chest – 4 stars

Rae and Hugh have been having some trouble, and the gopher in Rae’s chest is giving her a time about it. The characters in these stories are so fleshed out for so few pages. This story was quite sweet and Rae and Hugh’s relationship was an interesting one to get a glimpse into.

Ain’t Nothing But Fire – 4 stars

Hardy is preparing for a visit from his ex-wife Loretta, who he figures has come to give him bad news. I’m so happy this story focused on Janine’s parents, particularly her dad. We were introduced to Hardy in the other two stories with Janine and it was nice to get his side of things and to better get to know him, as well as to get a glimpse of what’s happened in Janine’s life since “Sale Day.”

Lula is called to work a double shift much to the disappointment of her daughter Katrina. A lot of good characterization in this one but it lost me with it’s shortness.

A girl, who resents her mother, goes with her to get some pictures developed in a dark room. There’s more to the story than that but wow, this story is raw and aching, so heartbreaking and so complete. This is one I’ll re-read for pure enjoyment.

A brief look at a poor and falling apart neighbourhood. A great portrait, I could see everything Gilstrap was describing so clearly in my mind’s eye. Beautifully written.

Gwen Of All Gwens – 5 stars

Gwen’s a loner, her friends are tired of her looking like a “Fleetwood Mac redneck” and honestly Gwen’s a bit tired of them too and would much rather sneak into bars to listen to some local bands and memorize Ophelia’s speech. I loved the imagery in this, it reminded me of my high school emo days. I really hope there’s some more Gwen stories in this book.

The Best Kind of Light – 4 stars

A woman’s daughter and granddaughter come back home when they run out of options of where to go. In just a few pages Gilstrap paints a picture of family relationships, old wounds, and next steps in the most beautiful way.

Meredith helps her neighbour Jolene with a project. Not my favourite of the anthology, the characters weren’t as memorable or as interesting as some of the others but I liked how it ended.

After the death of her sister, a woman struggles between grief, guilt, and finding her place in the world. I liked the mood of it, liked the complicated grief, the anger, the hopelessness and guilt Jane felt but this story just didn’t stick like the others did.

Layla believes she’s met her match with Beau and the beautiful home he dreams of building for them. How can a story that starts with a wedding end up hurting so much?

In the titular story of the collection, we follow Layla from the previous story. I don’t know if this or the previous story were written first but I really enjoyed this one, I almost wish I hadn’t been given the backstory from “Still Soft, Still Whole” and gotten to meet Layla for the first time in “Deadheading.” A good, strong story to end with. 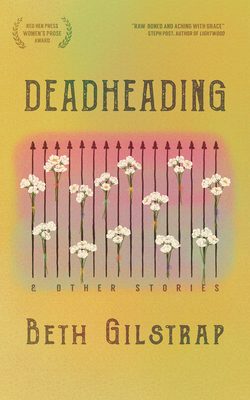 “Irrevocably tied to the Carolinas, these stories tell tales of the woebegone, their obsessions with decay, and the haunting ache of the region itself–the land of the dwindling pines, the isolation inherent in the mountains and foothills, and the loneliness of boomtowns. Predominantly working-class women challenge the status quo by rejecting any lingering expectations or romantic notions of Southern femininity. Small businesses are failing. Factories are closing. Money is tight. The threat of violence lingers for women and girls. Through their collective grief, heartache, and unsettling circumstances, many of these characters become feral and hell-bent on survival. Gilstrap’s prose teems with wildness and lyricism, showing the Southern gothic tradition of storytelling is alive and feverishly unwell in the twenty-first century.”

OLA Superconference was so much fun and I hope I get the chance to go back next year.
When your glasses match your current read... 👓👓👓
Once upon a time I tried to make a podcast about dead girls in media and our obsession with them. Now I have a Substack.
Sometimes, you just can't trust the Goodreads Reader's Choice Award for Horror. Sometimes, you can't trust #BookTok.
Got a cool little light for Christmas and now I only take 💫artsy💫 selfies
New #BookReview!!!
Join 56 other subscribers
Loading Comments...