“Fear makes us blind, and we touch each fear with all the avid curiousity of self-interest, trying to make a whole out of a hundred parts, like the blind men with their elephant,” (King xvi).

I haven’t read nearly as much Stephen King as I ought to have, but I’m trying to remedy that. My dad is a big Stephen King fan and through him I’m lucky to get to read his many first editions of King books (dust jackets and all!) as well as the Mass Market paperback of Night Shift (good old fashioned keyhole covers, I love them). He’s talked up this collection of short stories for years to me, telling me about “I Am The Doorway” and “Strawberry Spring,” about how chilling so many of these tales were and how good the collection is overall. My sister read the book last year and similarly pushed me to read it, and finally I have.

Night Shift is Stephen King’s first short story collection and it’s a masterpiece. Of course I knew of Stephen King’s history of horror, but I was unprepared for the number of sad and moving stories in this collection that weren’t scary at all. I learned a lot about King as a writer in this collection, adored his introduction (if you haven’t read On Writing then do it, even if you aren’t a writer because King’s voice is fantastic) where he talks about fear. Many of these stories are absolutely chilling and unforgettable and I understand why so many of them in this collection have been adapted into (at times less than stellar) movies. Some of the other stories are…well, you can’t be good at everything.

Overall Night Shift is a wonderful collection of stories that makes me even more eager to dive into King’s work. You can read my thoughts on all of the stories in Night Shift below: Jerusalem’s Lot – 3 stars

A prequel to King’s ‘Salem’s Lot which I haven’t read, but I know it has vampires so I probably will. Another thing with Puritans, they just keep pulling me in, and another epistolatory story. Not bad, good gothic vibes, but one I’d probably appreciate more had I read ‘Salem’s Lot.

A man works at an old mill factory and notices a lot of vicious rats and strange sounds. I liked it better than “Jerusalem’s Lot” but after reading the entire collection it isn’t my favourite. Good creep factor if you hate vermin.

A group of young adults participate in some casual murder/sacrifice during the end of the world. This one has connections to “The Stand” which I also haven’t read, but is about a pandemic so it made this story even freakier. Very sad with a sick kind of horror that comes out of nowhere.

An astronaut returns from a trip to space with interesting side effects. My dad hyped this story up for years before I actually read the anthology and it was definitely worth it, a classic of King’s short fiction.

Haunted evil laundry machine. Spoilers I guess but also not really because I don’t know what to say or how to rate this. I don’t know why King is so obsessed with machines and horror, I know he’s trying really hard to make them scary but it just isn’t working. I simultaneously hated and loved this story because for horror it’s ridiculous but as a comedy it’s a joy. Favourite moments include:

A man goes to a psychiatrist and gives a terrifying story of how he is inadvertently responsible for his children’s deaths. My sister hyped this one up and I liked it but sort of saw what was happening as I’ve read other stories with similar premises. A good chill factor though!

A man drinks some bad beer and things escalate. This story had a great ick factor to it, very grotesque.

Battleground – 2 stars An assassin is given a package and then deals with some unlikely foes. I don’t know why I gave this higher on Goodreads, I didn’t like it that much. This story reminded me of a 90s movie with toy soldiers that I couldn’t remember the name of at the time but is in fact called Small Soldiers.

Trucks – 1 star The trucks are alive and they aren’t happy. I was warned about this story, I was still unprepared. I really don’t get why King loves evil machines so much but this story prompted him to direct his own adaption of it. So yeah. I know trucks are scary, they could kill me whether they were evil or not. The last line is great even though I argued about it with my sister.

Sometimes They Come Back  – 3.5 stars

A man returns to teaching after a nervous breakdown only to get some interesting students. This is one of the longer stories in the collection and has a very interesting premise, also very sinister.

A man recalls a series of murders that happened when he was in college. A good story that was hyped up to me and deserved it. I’m surprised how well it works with today’s reader, especially from a true crime viewpoint. It was adapted into a podcast last year and I’m excited to listen to it.

A man is given a dangerous bet. Not a horror but a thriller which was a nice change, overall forgettable but I really enjoyed it.

The title says it all. I was warned about this story and it was worth listening to. This story is grotesque and horrifying though, so it did it’s job.

A man decides to quit smoking. This was another one I was hyped up about and it was fantastic, a great look at addiction and how far a person is willing to go to quit. The last line is absolutely chilling!

I Know What You Need – 4 stars

A young woman meets a guy who knows exactly what she needs. It’s our first (and only) short story in the collection with a woman protagonist, yay!!! Honestly the story isn’t super strong, but I love the topics that it’s dealing with and am surprised this story isn’t talked about more, especially for modern audiences. The story focuses on themes of harassment, toxic masculinity, and incels.

Children of the Corn – 5 stars

An unhappy married couple travelling on vacation find something interesting while driving by some corn. Probably one of King’s most famous works (and movies), this story was disturbing and super creepy. It was a bit of a stretch that Burt was able to put everything together so neatly, but I’ll forgive it for creating such an atmospheric tale.

The Last Rung on the Ladder – 4 stars

A man gets a letter from his sister. Not a horror but heartbreaking, who knew Stephen King could do this? I was not expecting this story but it was so good, I’d love to read more stuff like this by him!

The Man Who Loved Flowers – 5 stars

A man buys some flowers for his girlfriend Norma. A short read that subverts expectations and excellently uses foreshadowing. Look at me sounding like an English teacher!

A man asks for the help of two others at a bar when his car is snowed in during a blizzard. This one’s a sequel to ‘Salem’s Lot and I enjoyed it more than “Jerusalem’s Lot,” makes me want to read the book even more now!

The Woman in the Room – 5 stars

A man visits his dying mother in the hospital. No horror here, only deep, irreparable sadness. Oof, this story triggered me like crazy but it was absolutely amazing. I understand why it isn’t the favourite of a lot of fans but based on the little I know of King, this story seems to be a bit autobiographical in some components and is an expert look at grief. 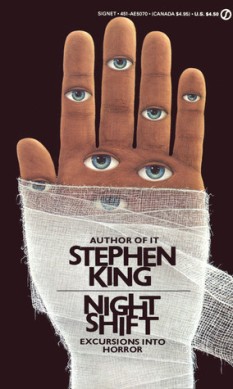 Source: Owned (Thanks Dad for being a lifelong King fan!!!)

From the depths of darkness, where hideous rats defend their empire, to dizzying heights, where a beautiful girl hangs by a hair above a hellish fate, this chilling collection of twenty short stories will plunge readers into the subterranean labyrinth of the most spine-tingling, eerie imagination of our time.