“This is the strange lesson of living in a pandemic: life can be tranquil in the face of death,” (St. John Mandel 195).

Eighteen-year-old Edwin St. Andrew comes to Canada after disgracing his family during a family dinner. He finds himself exploring a Canadian forest when he suddenly hears a few notes of a violin and strange hydraulic noises before the vision is gone, quickly explained away as a hallucination. Two centuries later, author Olive Llewllyn is on Earth for a book tour, far from her home on the second moon colony, the moment Edwin experienced curiously appears in the text of her famous pandemic novel Marienbad. Meanwhile, a detective in the Night City, Gaspery-Jacques Roberts, is hired to investigate an anomaly with the Time Institute with strict orders to investigate a Canadian forest and a young man, a famous author, and how it is their stories connect.

Sea of Tranquility is another parallel story to Station Eleven and The Glass Hotel, each a companion to the other. It isn’t necessary to read them all or to even give an order to reading them, they’re each their own unique story, but having read all three I did enjoy the Easter Eggs scattered throughout as well as recognizing certain characters popping up again in different ways. I was surprised by how quick a read it was, Mandel kept me engaged right from the start and I was eager to follow the threads of these stories as they tangled together. I found Olive’s storyline most engaging, an author of a pandemic novel on a book tour just as a pandemic is beginning. It’s hard not to notice the autobiographical element and comparisons and Olive and Mandel, both authors of pandemic literature when a pandemic rages. I thought Mandel wrote of the pandemic excellently, the bleakness, the tiredness from screens, how everything at the start felt frozen, like we and the world were all holding our breaths. I thought Gaspery was such a genuine, kind, and intriguing character as well. And though I haven’t mentioned Edwin much I enjoyed him too, his sweet innocence, his love in the beauty of the world.

The book was just so engaging, so addicting, strangely nostalgic and hopeful. I like the fiction of pretending people actually care about one another. SPOILERSPOILER

Any book that literally has me gasping in shock while reading is a good one in my books. Sea of Tranquility was such a stellar read, I’ll definitely be checking out Mandel’s older works after this! 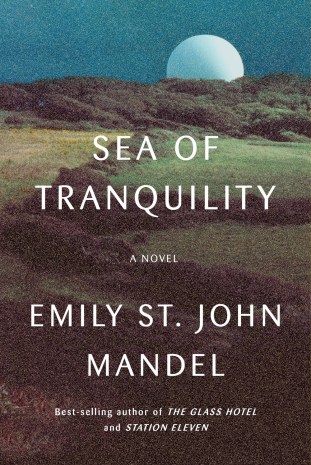 Edwin St. Andrew is eighteen years old when he crosses the Atlantic by steamship, exiled from polite society following an ill-conceived diatribe at a dinner party. He enters the forest, spellbound by the beauty of the Canadian wilderness, and suddenly hears the notes of a violin echoing in an airship terminal–an experience that shocks him to his core.
Two centuries later a famous writer named Olive Llewellyn is on a book tour. She’s traveling all over Earth, but her home is the second moon colony, a place of white stone, spired towers, and artificial beauty. Within the text of Olive’s bestselling pandemic novel lies a strange passage: a man plays his violin for change in the echoing corridor of an airship terminal as the trees of a forest rise around him.
When Gaspery-Jacques Roberts, a detective in the Night City, is hired to investigate an anomaly in the North American wilderness, he uncovers a series of lives upended: The exiled son of an earl driven to madness, a writer trapped far from home as a pandemic ravages Earth, and a childhood friend from the Night City who, like Gaspery himself, has glimpsed the chance to do something extraordinary that will disrupt the timeline of the universe.
A virtuoso performance that is as human and tender as it is intellectually playful, Sea of Tranquility is a novel of time travel and metaphysics that precisely captures the reality of our current moment.

Am I do this #BookFace right???
When you happen to dress up like one of the books in one of your favourite series.🐝🐝🐝
TODAY'S THE DAY!!! YOU CAN NOW LISTEN TO MY SHORT PLAY "DEAD SERIOUS" ON SPOTIFY!!!
I finally read #WhereTheCrawdadsSing by #DeliaOwens!!! A well-written, book club book. Not sure what I mean??? Read my full #BookReview on my blog, link in bio!!!
Rainbows from my suncatcher on books I've read, is there anything better???
#MidnightMass is one of my favourite shows and this book is fantastic!!!
Loading Comments...