A few hours before midnight on New Year’s Eve, twenty-four-year-old British painter Cleo meets forty-five-year-old advertising CEO Frank and there is an instant connection. Frank is enchanted by Cleo’s beauty and artistic nature while Cleo is impressed by Frank’s success. Before either of them know it they’re married, changing both of their lives and those of their loved ones in ways neither of them could have predicted.

I’d seen Cleopatra and Frankenstein floating around Goodreads for a while and was interested by the title and it’s gorgeous cover. It sat on my seemingly never-ending TBR pile until my library notified me that now there were holds on it, and if that isn’t motivation to read and finish a book then I don’t know what is!

The book is wonderfully written, with gorgeous descriptions of New York and such in-depth characters you can’t help but admire them despite their flaws. And it’s quite a large cast of characters, our titular Cleo and Frank, Anders, Santiago, Zoe, Eleanor, Quentin, Audrey, but despite the large cast Mellors succeeds in making each and everyone memorable and real. I was surprised by how much Zoe grew on me and loved Eleanor’s brief first person perspective, as well as Santiago’s. I did struggle with Cleo a lot though and found at times that her character came off as more of a caricature of artistic depression and really had trouble empathizing and liking her compared to the other characters. Frank is obviously no saint, but

I originally wanted to rate the book lower once I finished it, but the longer it sat with me the higher my rating became. I just kept thinking about how cleverly everything fit without being in your face. The themes of addiction and mental health, different coping strategies, age gaps in relationships and power differences. All of these things are shown and done in such a variety of subtle ways that you don’t realize it’s part of a big picture until the ending, and it made me enjoy the story so much more.

Cleopatra and Frankenstein is a masterful debut filled with a cast of characters that will stick with you long after the last page is turned. I can’t wait to see what Mellors has in store for her reader’s next! 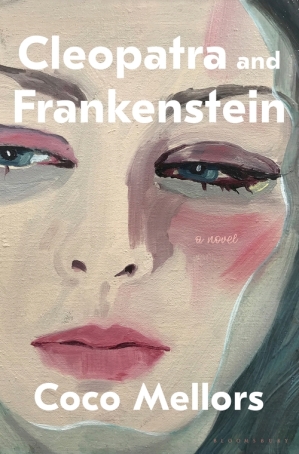 Twenty-four-year-old British painter Cleo has escaped from England to New York and is still finding her place in the sleepless city when, a few months before her student visa ends, she meets Frank. Twenty years older and a self-made success, Frank’s life is full of all the excesses Cleo’s lacks. He offers her the chance to be happy, the freedom to paint, and the opportunity to apply for a Green Card. But their impulsive marriage irreversibly changes both their lives, and the lives of those close to them, in ways they never could’ve predicted.
Each compulsively readable chapter explores the lives of Cleo, Frank, and an unforgettable cast of their closest friends and family as they grow up and grow older. Whether it’s Cleo’s best friend struggling to embrace his gender queerness in the wake of Cleo’s marriage, or Frank’s financially dependent sister arranging sugar daddy dates to support herself after being cut off, or Cleo and Frank themselves as they discover the trials of marriage and mental illness, each character is as absorbing, and painfully relatable, as the last.