“We live in a world where exceptional women have to sit around waiting for mediocre men,” (Jenkins Reid 297).

After Nicki Chan matches Carrie Soto’s record of twenty Grand Slam titles in tennis, she decides to come out of retirement. At thirty-seven, she’s the oldest woman tennis player to do so, but Carrie Soto is determined to continue being the best. Her coach and father Javier, a former tennis champion as well, has trained her since she was a child and knows exactly how to help Carrie keep her title even though her body doesn’t move the way it used to, and she isn’t as quick, and the media never really liked her “Battle-ax” brutality on the court. But it also means she needs the help of Bowe Huntley, another tennis player and former flame who’s willing to do what he can to help Carrie take back her record. But Carrie Soto is a force to be reckoned with, and she will do whatever it takes to continue being the best tennis player the world has ever seen.

Wow wow wow Taylor Jenkins Reid I am OBSESSED WITH YOU! I wouldn’t regularly go out of my way to read a book where the primary focus is sports, but here we are and I enjoyed it!

I loved The Seven Husbands of Evelyn Hugo and appreciated Malibu Rising. One of Taylor Jenkins Reid’s greatest strength as a writer is her research into what she is searching, whether it’s classic Hollywood or the children of a deadbeat dad/famous actor who bond through surfing and house parties, it is her characters interests that make them feel so real. Evelyn Hugo is passionate about her acting career and the detail of classic Hollywood as well as her many lover affairs is what made her character so enchanting to so many. Similarly reader’s fell in love with the Riva siblings because of their many varied interests from surfing to photography to modelling, etc. and how it connected to the family bond and love they all feel for each other. In her newest work, Taylor Jenkins Reid gives us Carrie Soto, who reader’s were briefly introduced to in Malibu Rising, and she is the best tennis player in the world and is determined to continue being the best no matter how impossible the task may seem.

Unlike Evelyn or the Riva siblings, Carrie Soto is not nice and she never intends to be. Getting the name “Battle-ax” on the court, Carrie Soto is known for her fierceness, her need to win and how much she hates losing. She is determined, filled with pride, and has an incredibly small circle of people in her life who she allows to help her, and she is so incredibly real. I loved reading about Carrie so much and learning about what makes her tick, what makes her scared, and how far she’s willing to go to succeed.

And damn you Taylor Jenkins Reid, you made me cry in this one! Using my own triggers against me and making me all existential and everything. I just thought this was going to be about tennis!

Carrie Soto is Back is worth the hype and she deserves your attention. This isn’t just a tennis book, it’s a story about determination, love, and focusing on the things that matter in life. I can’t wait for whatever Taylor Jenkins Reid writes next! 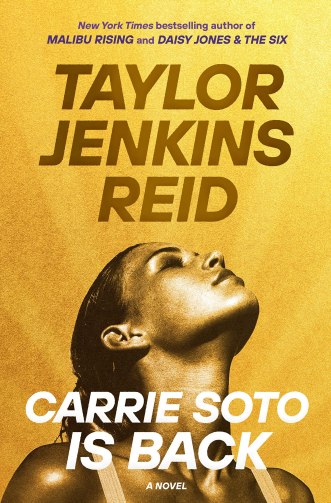 Carrie Soto is fierce, and her determination to win at any cost has not made her popular. But by the time she retires from tennis, she is the best player the world has ever seen. She has shattered every record and claimed twenty Grand Slam titles. And if you ask Carrie, she is entitled to every one. She sacrificed nearly everything to become the best, with her father, Javier, as her coach. A former champion himself, Javier has trained her since the age of two.
But six years after her retirement, Carrie finds herself sitting in the stands of the 1994 US Open, watching her record be taken from her by a brutal, stunning player named Nicki Chan.
At thirty-seven years old, Carrie makes the monumental decision to come out of retirement and be coached by her father for one last year in an attempt to reclaim her record. Even if the sports media says that they never liked “the Battle-Axe” anyway. Even if her body doesn’t move as fast as it did. And even if it means swallowing her pride to train with a man she once almost opened her heart to: Bowe Huntley. Like her, he has something to prove before he gives up the game forever.