“Dying was a part of living. You had to keep tuning in to that if you expected to be a whole person. And if the fact of your own death was hard to understand, at least it wasn’t impossible to accept,” (King 312).

After losing his teaching job, Jack Torrance is grateful when his former co-worker finds him a job at a remote mountain resort during the off-season. Even better, his wife Wendy and young son Danny can come and live with him in the infamous Overlook Hotel. As the family settles into the hotel and the snow starts falling, the Overlook’s past reveals itself to Jack. It seems the Overlook is more sinister than it initially appeared, and it wants the Torrance’s.

SPOILERS BELOW, STOP AT YOUR OWN RISK!!!

I’ve never seen Kubrick’s infamous 1980’s adaption of The Shining. I’m aware of it, who isn’t considering the mark it’s made on the horror genre? “Come play with us Danny, All work and no play makes Jack a dull boy, Hereeee’s Johnny!”, that infamous carpet, regardless of King’s own dismissal of the adaption, the story and the Torrance family are known to audiences whether or not they’ve seen or read The Shining and that means something.

That being said, when your knowledge of The Shining comes from an adaption that proudly craps on the source material, you can’t help but be shocked by the differences. For example, the above quotes I mentioned are Kubrick originals as is the carpet, and I was shocked by how different even the characters were. Regardless of the differences between them, I will say that I thoroughly enjoyed King’s The Shining much more than I thought I would.

The Torrance family is an interesting one. When we’re introduced to Jack his anger is evident in his interview for the caretaking position, but there’s a struggle there too. Jack is an aspiring writer and a former alcoholic, only a few months sober when we start the book. This doesn’t excuse his actions; Jack’s anger is a scary thing. It’s revealed that when Danny was three, Jack broke his arm while drunk and that he was fired from his job for assaulting a student. He wants to change though; he loves his wife and son and after losing his job he’ll take any job that he might think is demeaning (like being a caretaker for a hotel) to support them. But the anger is still there, and this is the 1970s. It’s not like there was a lot of mental health care at that time, especially for men. So Jack struggles, and it was reading about these struggles while the Overlook took hold that was incredibly fascinating.

Danny’s was heart-aching to follow. Five-years-old with a great power that he knows nothing about but knows things he shouldn’t. Not his fault of course, the shining is a strange and powerful thing, and while he’s just trying to be your average five-year-old he’s now found residence in a haunted hotel whose ghostly residents want him, and he knows his parents have considered divorce, he has been assaulted by his father, knows he’s an alcoholic without knowing what that means and that his mother is constantly worried, that’s a lot on a kid!

Wendy is probably the weakest character. As much as I love Stephen King, he really struggles with writing women characters. Wendy is fairly two-dimensional, she’s a young mother and worries about Danny, going so far as to consider divorce for his safety but knowing also that that doesn’t leave a lot of options for her. Again, it’s the 1970s, and there wouldn’t be a lot of options for a single mom at that time. The only option she goes back to is living with her mother who’s revealed to be abusive, and so just like Jack is stuck in a job he doesn’t necessarily want Wendy is stuck in a marriage she thinks can be saved but is getting more dangerous by the day.

The Overlook Hotel should really be considered a character all its own because THIS IS ONE SCARY HOTEL! King does an excellent job with the atmosphere here, slowly filling the book with dread as the Torrance’s stay longer in the hotel. It really isn’t until the snow starts falling that you realize how trapped these characters are. King does a great job showing this with Jack, one chilling seen as he is in the shed watching Danny play in the snow and makes a decision that seals all their fates, as well as a scene near the end in the same shed with Dick Hallorann which sent chills up my spine. 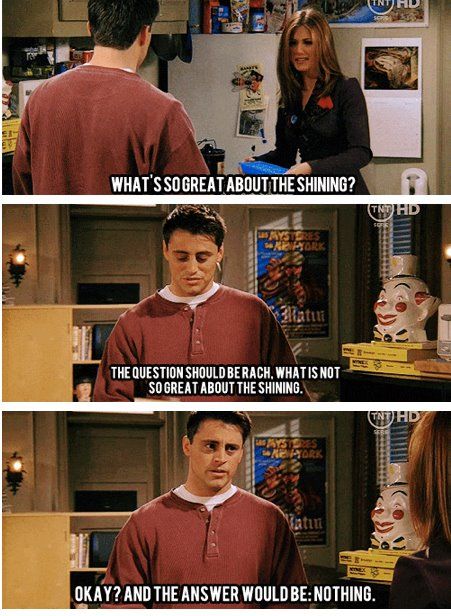 Joey Tribbiani wasn’t kidding about putting The Shining in the freezer because IT’S SCARY! It gave me a nightmare, and the only horror book that’s been able to do that so far was House of Leaves, so good on you King! The Shining truly is a hauntingly horrific read and one all horror fans need on their shelves!

And Happy Halloween! Here’s another, shorter adaption of The Shining which is how I was originally introduced to the book.

This tale of a troubled man hired to care for a remote mountain resort over the winter, his loyal wife, and their uniquely gifted son slowly but steadily unfolds as secrets from the Overlook Hotel’s past are revealed, and the hotel itself attempts to claim the very souls of the Torrance family.
The Shining stands as a cultural icon of modern horror, a searing study of a family torn apart, and a nightmarish glimpse into the dark recesses of human weakness and dementia.

I had a day off yesterday, so I made an #OrchardDress!!! I've never made a dress before, but @helens__closet had a free pattern and I had some fabric so I thought I might as well try.
ANOTHER EXCITING THING!!!
In August, I found out that my story "On the Rocks" was the winner in the Prose Category of Dawson City's 2022 Authors on Eighth writing contest.
Visited Toronto on the weekend and the very cool @littleghostsbooks which was so cool and has a 12ft skeleton on the patio!!! Also very good coffee @tlscoffee and an amazing dinner as always at The Spaghetti Factory in a very cool seating area!!! 👻👻👻
And the Halloween fits!!!
And now that I've posted all of my story I CAN POST ALL THE OTHER THINGS I'VE WANTED TO!!!
Join 55 other followers
Loading Comments...