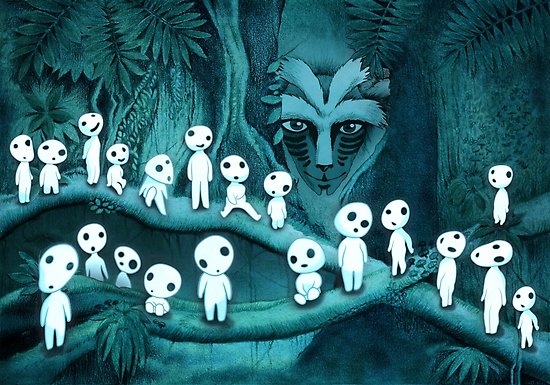 Today’s prompt was a difficult one because I know very little about forest spirits, but here’s something anyways!

I don’t know a lot about forest spirits. They weren’t the type of magic I was interested in as a kid, am interested in now. The only forest spirits I was aware of were the dryads and nymphs in Greek mythology, whose stories were still interesting but nothing compared to the gods, goddesses, and demi-gods whose stories I devoured. Still, it was a nice thought though and I understand why people like the idea of forest spirits. To sit in a tree with flowers and leaves in your hair, to make the flowers bloom, to give things life.

When I searched “forest spirit” on Google for some idea of what I would write about today it gave me a link to a character from the Studio Ghibli film Princess Mononoke. I haven’t seen the movie (though I plan to one day) but Google described the forest spirit as a character who is known as a god of life and death in the movie, which I think is a pretty unique and different look at the forest spirits I’ve grown up with. Similarly in Princess Mononoke, there are small spirits known as Kodama who reside and inhabit trees very much like dryads from Greek mythology.

I really like the contrast of a forest spirit having power over both life and death. When we think of forests and nature we often just focus on the life aspect of it, of the green and sprouts and blooms. Even when we admire the changing of the leaves in autumn we ignore the fact that they’re dying, that everything dies. But they come back again, every spring with the buds and the bloom.

They come back, and maybe we will too.

It's always hard to find a fun way of showing the ebooks I've read on Instagram, but I'm pretty happy with how this one turned out!!!
I wrote a blog post for @hamiltonhive in preparation for the 2022 STEEL Conference, read it on their website. Link in bio!
Happy Belated Release Day to OUT FRONT THE FOLLOWING SEA @leahangstman!!! You know a book is good if I was okay with the romance and didn't mind that the witch storyline was so small.
Seven years later it's still impossible to find the right words to say how much I love you, how much I miss you. I can't believe all the things that have happened since you died, how much the world has changed and all the things you've missed. One clear thing I know is that the world would be a better place with you still here, that it's been so much harder without you.
Year Ahead Spread for 2022 let's goooo!!!✨✨✨
2021 Top 9!!! 🎊🎉🍾