“When you go missing it’s not so easy to return. Maybe you never really do,” (Goodman 259).

I thought I was going to give up on this book. Once physical distancing was put into effect this was the first of my library books that I decided to read to start off quarantine but I gave up on it, and I never give up on a book. So I read all of my other library books (it was A LOT of books) and found I still couldn’t give up on this book. So I picked it up again and was surprised to be more into it when I returned to the story again.

The Sea of Lost Girls follows Tess Levine who picks up her seventeen-year-old son Rudy one morning at 2:50 AM to find him cold and wet with a dark stain on his sweatshirt. Four hours later Tess gets a call from the headmistress of Haywood Academy, where Tess is a teacher, that one of her students Lila Zeller has been found dead, and this student just so happens to be Rudy’s girlfriend. Lila was found not far from where Tess had picked up Rudy just mere hours before. Tess is sure that her son is innocent but as the investigation continues both Rudy and Tess’ husband Harmon become suspects as well as the knowledge that Lila isn’t the first girl to go missing at Haywood. Tess digs deeper into Haywood’s troubled past which mixes with her own, and this is a past full of secrets Tess doesn’t want revealed.

Goodman’s novel is full of twists that I didn’t see coming when I first began reading, and it was these twists that really sucked me back into the story and kept me hooked to the end. Goodman has such a subtle way of revealing things that you have to go back and re-read a sentence just to believe that what was just revealed actually happened. But overall I just felt disconnected from the story Goodman was trying to tell.

I think she is telling a story about an important subject and I think she does it well. I enjoyed the comparison of The Crucible and victim blaming and really enjoyed Goodman’s own explanation about the figure of “The Lost Girl” and what decisions she made to tell this story. But I just wanted more and I don’t know what exactly that is. I just felt so far away from Tess that I couldn’t care more about the subject matter even though I really enjoy books with similar storylines.

Goodman is a very talented writer and created a great atmosphere and setting for this story and knows how to tug readers in with some good twists, but it just wasn’t the book for me. 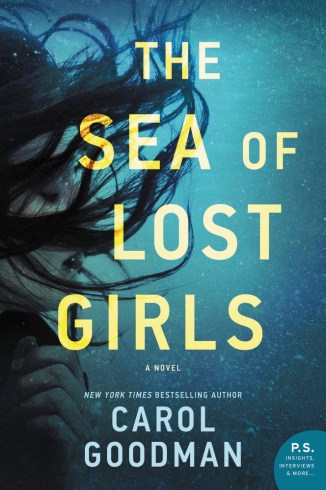 “Tess has worked hard to keep her past buried, where it belongs. Now she’s the wife to a respected professor at an elite boarding school, where she also teaches. Her seventeen-year-old son, Rudy, whose dark moods and complicated behavior she’s long worried about, seems to be thriving: he has a lead role in the school play and a smart and ambitious girlfriend. Tess tries not to think about the mistakes she made eighteen years ago, and mostly, she succeeds.

And then one more morning she gets a text at 2:50 AM: it’s Rudy, asking for help. When Tess picks him up she finds him drenched and shivering, with a dark stain on his sweatshirt. Four hours later, Tess gets a phone call from the Haywood school headmistress: Lila Zeller, Rudy’s girlfriend, has been found dead on the beach, not far from where Tess found Rudy just hours before.

As the investigation into Lila’s death escalates, Tess finds her family attacked on all sides. What first seemed like a tragic accidental death is turning into something far more sinister, and not only is Tess’s son a suspect but her husband is a person of interest too. But Lila’s death isn’t the first blemish on Haywood’s record, and the more Tess learns about Haywood’s fabled history, the more she realizes that not all skeletons will stay safely locked in the closet.”