Ten years ago Grey, Vivi, and Iris Hollow disappeared from an Edinburgh street and were found a month later. They have no memories of where they went, only that their blue eyes turned black, their dark hair turned white, a crescent moon scar on each of their throats. They are disturbingly beautiful with insatiable appetites, and strange things happen to them and those around them. Now seventeen, Iris’ oldest sister Grey has gone missing again and she’ll need the help of her middle sister Vivi to follow Grey’s strange clues to find her, maybe even solving the mystery of what happened to the three sisters all those years before.

The cover of House of Hollow drew me in much like the Hollow sisters do to those around them. Unlike those characters, the story itself did not hold me. There is some nice writing, though some of the prose verges on purple then anything that really compelled me. It’s an intriguing premise but with a lot of repetition of scent imagery, things smelling like rot or “green.” For a short book the story is incredibly slow, making me less interested in the mystery as it took forever to learn any new information about it.

Iris is also a very dull, codependent protagonist. I liked Grey’s aesthetic and really enjoyed Vivi. Classic middle sibling syndrome that we didn’t get enough of her. Overall though the Hollow sisters are never fully developed, they feel like stock characters from a fairy tale, all looking eerily similar and have weird fair tale aspects of each being one sort of shared thing (Ex: one sister is straight, one is a lesbian, meaning the other is bi, etc.). Add that to the fact that a lot of information is conveniently forgotten or left in the dark despite a character claiming to remember everything, it felt like a cheap way to end a mystery.

There are some deliciously horrifying moments to House of Hollow, ones I wish were expanded on more. It has all the aspects of a more mature fairy tale but fails to deliver. There’s definitely an audience for this book but I was not one of them. 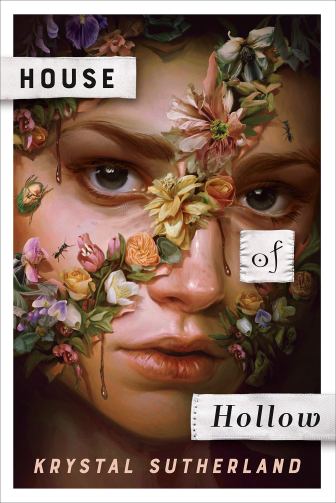 Seventeen-year-old Iris Hollow has always been strange. Something happened to her and her two older sisters when they were children, something they can’t quite remember but that left each of them with an identical half-moon scar at the base of their throats.
Iris has spent most of her teenage years trying to avoid the weirdness that sticks to her like tar. But when her eldest sister, Grey, goes missing under suspicious circumstances, Iris learns just how weird her life can get: horned men start shadowing her, a corpse falls out of her sister’s ceiling, and ugly, impossible memories start to twist their way to the forefront of her mind.
As Iris retraces Grey’s last known footsteps and follows the increasingly bizarre trail of breadcrumbs she left behind, it becomes apparent that the only way to save her sister is to decipher the mystery of what happened to them as children.
The closer Iris gets to the truth, the closer she comes to understanding that the answer is dark and dangerous – and that Grey has been keeping a terrible secret from her for years.

Am I do this #BookFace right???
When you happen to dress up like one of the books in one of your favourite series.🐝🐝🐝
TODAY'S THE DAY!!! YOU CAN NOW LISTEN TO MY SHORT PLAY "DEAD SERIOUS" ON SPOTIFY!!!
I finally read #WhereTheCrawdadsSing by #DeliaOwens!!! A well-written, book club book. Not sure what I mean??? Read my full #BookReview on my blog, link in bio!!!
Rainbows from my suncatcher on books I've read, is there anything better???
#MidnightMass is one of my favourite shows and this book is fantastic!!!
Loading Comments...