I received this book from The Next Best Book Club in exchange for an honest review.

It’s 1990 and seventeen-year-old Kirby Russo has finally found peace. Attending a prestige’s military school, Kirby believes he finally has his life figured out: that once he becomes the chief editor for his schools newspaper his life will finally have the purpose he’s been looking for. But his dreams are dashed when a rich classmate gets the editorship over Kirby, and his old delinquent habits come back along with his long-absent father who wants to bring him to Chicago, where Kirby’s ex-girlfriend Izzy also happens to be and where she may be in trouble. Things haven’t aligned the way Kirby planned out but they’re taking him somewhere, and Kirby is ready to take that road wherever it leads him.

The Prince of Infinite Space is such a strongly written book! While I can’t comment too much on the setting either in place or time in terms of accuracy (I’m Canadian and was born in the 90s, so I wasn’t all that aware about what was happening State-side) I think it felt like the 90s. There weren’t a ton of allusions to it, which is nice because I find some books really ham up the pop culture references to make a point, but it just felt authentically 90s, if that makes any sense. I also loved Kirby, he’s such a complex, flawed, and tragic protagonist. When I was sent this book, the press release included a quote from author Patricia Ann McNair who called Kirby a “kinder and more vulnerable” Holden Caufield, and if that just isn’t the most accurate description I’ve ever read! I’m a big time lover of Catcher in the Rye and this book felt almost like it’s long lost brother or very distant cousin. I was sucked in by Cromley’s writing, eager to learn more about Kirby and wanting so badly for him to succeed. Through Kirby’s perspective reader’s get an aching look at someone trying so hard to better themselves, to change the course of their life when life seems to keep putting them back on a path they’re trying to avoid, the bitter taste of failure and trying desperately to find hope in all the bad.

I will say I had trouble with the pacing. The start of the book is very strong but once Kirby’s father is introduced things get a little slapdash. Some plot points seem to just zoom by, and while there are some very good moments between Kirby and his father the deeper he gets into Chicago the weaker the book seemed to go. The ending was also a bit of a shock, coming seemingly out of nowhere, we the reader’s suddenly placed “here” with Kirby, not really sure what to think. This might be done purposely though since The Prince of Infinite Space is a sequel to The Last Good Halloween, so I wonder if Cromley ended things so abruptly on purpose to continue his story later. I hope so, I miss Kirby.

Overall, The Prince of Infinite Space is a strongly-written coming-of-age story with a protagonist you can’t help but feel for, I just wish there was a little more to it! 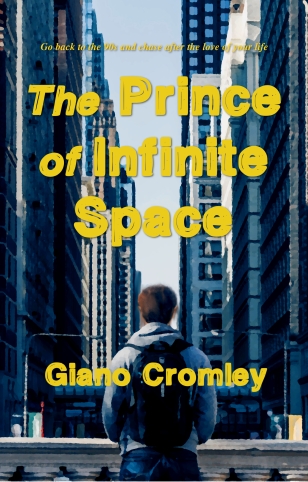 It is 1990 and, while the country stands on the brink of war with Iraq, Kirby Russo is finally at peace with the world. At seventeen years old, he’s figured out some important lessons: how to stay out of trouble with the authorities; how to write muck-raking articles that expose the hypocrisy of said authorities; and, most importantly, how to avoid obsessing about his long lost girlfriend Izzy (who has run away and may be in trouble in Chicago). But when a rich classmate snags the editorship of the school newspaper out from under him, Kirby knows his brief career as a conformist is over. An opportunity to reestablish his hell-raising bona fides arises when his long-lost father shows up with a shady past and a half-baked scheme. Together, they embark on a cross-country road trip to connect with a family he never knew, and maybe even track down Izzy. Kirby soon realizes, however, that life’s biggest lessons – the ones that really matter – never happen according to plan.