“The empty devils are on the land like a cancer on the skin…They eat screams and drink pain. You had your horrors at the Overlook, Danny, but at least you were spared these folks,” (King 257).

Decades after a horrific winter in the Overlook Hotel, Dan Torrance drifts through life and alcohol, desperate to escape his father’s legacy of violence and abuse. He settles in a New Hampshire town, joins an AA group, and finds work at a nursing home where he is called “Doctor Sleep” as his “shining” allows him to bring the dying comfort in their final moments. Then Dan meets twelve-year-old Abra Stone, who shines brighter than he’s ever known. But Abra’s shine has caught the attention of a group of people who travel by RVs known as The True Knot, seemingly harmless, except that they look for those who shine and feed off of them, and Abra could keep them fed for a good long while. It’s The True Knot versus Dan and Abra, but can Dan keep the ghosts of his past at bay or will they consume him as they used to?

I really enjoyed Doctor Sleep but it’s a weird book. I did a reader faux pas and watched the Mike Flanagan movie first and it was AMAZING! If anything, Flanagan’s film is what interested me in reading this more despite the differences, and know what I know about the book and the movie I think he did an excellent job balancing both for a good adaption.

There are certain inconsistencies, or changes I suppose, that King purposely made that irked me as a reader. Maybe if it had waited thirty-six years between reading The Shining and Doctor Sleep I wouldn’t have cared, but care I did. Without spoiling anything, it’s a Star Wars: Rise of Skywalker level of changes that just pissed me off and made me happy that Flanagan did change this aspect in his adaption.

The characters are good though. I can’t really tell you if Dan/ny is consistent, he was literally five years old in The Shining and he ends up in his late-30s/early-40s in Doctor Sleep. But I think his character was consistent with his struggles of anger, violence, and alcohol, and looking at this cycle of abuse and his want to breakaway from that was very well-down. Abra was also good, a bit annoying as tweens can be sometimes, and she sometimes sounded more adult than she ought to have, but I still enjoyed reading her sections.

But here we are, the woman of the hour and my all-time favourite empty devil, ROSE THE HAT!!! 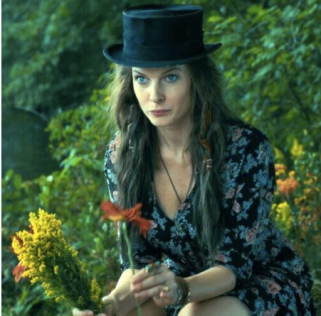 I became OBSESSED with this character when I watched the movie and I was nervous she wouldn’t be as amazing in the book, BUT SHE WAS! I LOVE the voice King wrote for her, how truly evil and villainous she was, her swagger, her voice, her STYLE! Did I buy my own fancy hat that I wear sometimes when reading/writing in homage to her? Yes. I love her, she’s the best, if nothing else read this book for her!

And an honourable mention to Snakebite Andi who was also amazing but had a surprisingly smaller role than in the movie, and was also older in the book which was odd (Andi is thirty-two in the book and fifteen in the movie). But I loved her too, but was angry that Stephen King made me do mental math to figure out her age. WHY COULDN’T YOU HAVE JUST TOLD ME SHE WAS THIRTY-TWO?!

Also, Stephen King, you wrote this in 2013 and STILL used a slur that you didn’t need to use. YOU DIDN’T NEED TO HAVE A SLUR FOR THAT CHARACTER’S NAME STEPHEN KING! Luckily, the Flanagan film also (thankfully) changed that.

The weird part about Doctor Sleep is that it really doesn’t feel like a sequel to The Shining. I acknowledge it is, the shining is mentioned and obviously an important plot point, and you can definitely write a sequel to a book many years after if you really want to, but Doctor Sleep felt like its own, individual story. As many reviewers have commented, there’s two stories happening in this book: Dan’s struggle with alcoholism and Abra discovering her shining abilities. I think King made them work well together, but if he had renamed Dan and not mentioned the shining then nothing would have related it to the previous work. Stephen King has written countless novels with children who have precognitive abilities, he’s also written many works with alcoholics. It really didn’t need to be a sequel to The Shining, but I understand that Dan’s story of alcoholism may not have come without some reference to Jack Torrance.

Like most of King’s works the ending is pretty weak, almost laughable actually. But as I’ve read more and more of King’s work, I’ve learned there’s certain things you go in just sort of preparing for. He’s still a good writer, but like with any person he’s got his flaws.

Overall, Doctor Sleep is an excellent read. While it didn’t give me a nightmare like The Shining did, it’s still terrifying with a cast of characters you can’t help but root and fear!

On highways across America, a tribe of people called The True Knot travel in search of sustenance. They look harmless – mostly old, lots of polyester, and married to their RVs. But as Dan Torrance knows, and spunky 12-year-old Abra Stone learns, The True Knot are quasi-immortal, living off the “steam” that children with the “shining” produce when they are slowly tortured to death.
Haunted by the inhabitants of the Overlook Hotel where he spent one horrific childhood year, Dan has been drifting for decades, desperate to shed his father’s legacy of despair, alcoholism, and violence. Finally, he settles in a New Hampshire town, an AA community that sustains him, and a job at a nursing home where his remnant “shining” power provides the crucial final comfort to the dying. Aided by a prescient cat, he becomes “Doctor Sleep.”
Then Dan meets the evanescent Abra Stone, and it is her spectacular gift, the brightest shining ever seen, that reignites Dan’s own demons and summons him to a battle for Abra’s soul and survival. This is an epic war between good and evil, a gory, glorious story that will thrill the millions of hyper-devoted fans of The Shining and wildly satisfy anyone new to the territory of this icon in the King canon.

I had a day off yesterday, so I made an #OrchardDress!!! I've never made a dress before, but @helens__closet had a free pattern and I had some fabric so I thought I might as well try.
ANOTHER EXCITING THING!!!
In August, I found out that my story "On the Rocks" was the winner in the Prose Category of Dawson City's 2022 Authors on Eighth writing contest.
Visited Toronto on the weekend and the very cool @littleghostsbooks which was so cool and has a 12ft skeleton on the patio!!! Also very good coffee @tlscoffee and an amazing dinner as always at The Spaghetti Factory in a very cool seating area!!! 👻👻👻
And the Halloween fits!!!
And now that I've posted all of my story I CAN POST ALL THE OTHER THINGS I'VE WANTED TO!!!
Join 55 other followers
Loading Comments...